The IAFF is tracking a host of new commitments that members of Parliament and senators have made on fire fighter issues in response to lobby visits during the 17th Canadian Legislative Conference.

The Conference, which took place April 25-28 in Ottawa, drew 140 IAFF members from across Canada who conducted lobby meetings with more than 120 members of Parliament (MPs) and more than a dozen senators.

Delegate responses indicate that a majority of MPs and senators support the creation of a national Public Safety Officer Compensation (PSOC) benefit, the IAFF’s top issue in Canada, and that support also exists for the creation of a national office for fire service statistics, for pandemic protection for fire fighters, for amendments to the National Building Code of Canada and for third-party investigations of fire fighter line-of-duty deaths.

IAFF General President Harold Schaitberger, in Ottawa to address delegates during the Conference’s opening session, commended the Canadian membership for its ongoing commitment to political action at all levels. “As we gather here today, I can feel the optimism,” Schaitberger said. “I want you to know how proud I am of all of you. There have been so many positive developments, and you have every reason to believe that with some hard work, the IAFF in Canada will continue to make progress and improve the lives and livelihoods of fire fighters throughout this great country.”

Schaitberger took the opportunity to congratulate newly-elected General Secretary-Treasurer Thomas Miller and to welcome Scott Marks, his new Assistant for Canadian Operations. He also thanked Jim Lee for his outstanding work in the IAFF Canadian Office for the past eight years. Lee was recently named Administrative Assistant and Chief Advisor to the General Secretary-Treasurer.

Miller, making his first appearance in Canada in his new role, greeted delegates warmly and talked about his history as an Indianapolis fire fighter, state association president and 8th District Vice President  He also talked about his vision for the IAFF going forward and commented on how he looks forward to getting to know the IAFF’s Canadian members and operations even better in his new role.

“I’ve seen and admired the hard work that goes on in Canada in terms of political action, and the victories you’ve achieved,” Miller said.

“I’ve always had a strong relationship with Canadian fire fighters and the Canadian DVPs. Now, I look forward to getting to know our Canadian members even better, and I hope to attend as many Canadian events as I can in my role as your General Secretary-Treasurer.” 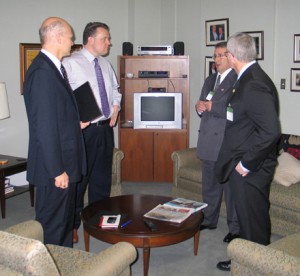 The Canadian Legislative Conference also featured MPs from multiple political parties and other speakers. Liberal Party leader Michael Ignatieff restated his commitment from 2009 that a Liberal government would implement the PSOC benefit and create a national office for fire service statistics if elected, and also expressed commitments on pandemic protection for fire fighters, the need for third-party investigations and building code amendments.

New Democratic Party of Canada (NDP) leader Jack Layton also confirmed his party’s complete support for the IAFF’s legislative agenda, and Conservative MP Dick Harris (Cariboo-Prince George, BC) thanked fire fighters for the work they do in their communities.
Also speaking to delegates during opening ceremonies was Chief Robert Simonds, of Saint John, New Brunswick. Simonds, who is designated to become president of the Canadian Association of Fire Chiefs this year, expressed his support for the IAFF’s Canadian legislative agenda and welcomed the growing relationship between the IAFF and the CAFC.

Elizabeth May, leader of the Green Party of Canada, addressed delegates for a second year and again expressed her party’s support for the IAFF’s federal legislative issues.

The Conference took place with a record number of private members’ bills and motions on IAFF issues as a backdrop. Fire fighter legislation introduced in the current session includes Bill C-495, from Vancouver-Kingsway BC MP Don Davies, which would establish a national office for fire service statistics and numerous private members’ motions on the PSOC benefit, third-party investigations, building code amendments and the creation of a fire statistics office.

NDP MP Peter Julian (Burnaby-New Westminster, BC), whose non-binding private members’ motion M-153 was adopted in the House of Commons in October 2005, rose in the House of Commons again on April 27 – the IAFF’s lobby day – to urge the Canadian government to enact the PSOC benefit. Julian reminded his colleagues that a majority of MPs representing a majority of Canadians have already agreed that the benefit should exist. “For four and a half years the Conservative government has steadfastly ignored our brave fire fighters and police officers by refusing to implement this benefit,” Julian said in the House of Commons.

“While widows, widowers and children of fallen fire fighters and police officers are forced sometimes to sell their homes and give up school and they live financial hardship, nothing has been done. The government should apologize for the disrespect it has shown to Canada’s fallen and their families. It should immediately put into place the supports for the families of those who lost their lives while protecting the lives of Canadians. It should do it now.

Video of Julian’s statement in the House of Commons is available online.

Close to 130 MPs and senators attended the IAFF Parliamentary Reception held during the evening of lobby day, as did many Parliament Hill staffers.
Conservative MP Patrick Brown, of Barrie ON, organized a hockey tournament with mixed teams of MPs and fire fighters. Barrie Local 1753 delegate Kevin White recruited 15 fellow IAFF members to participate in the tournament, which was held at an Ottawa rink, raised $2,500 for Muscular Dystrophy Canada.

The Conference’s, which coincided with the National Day of Mourning for workers killed on the job, featured a moving tribute to fire fighters, soldiers and all workers who have died as a result of workplace accidents and illnesses.

About the Author: Kevin Cunningham